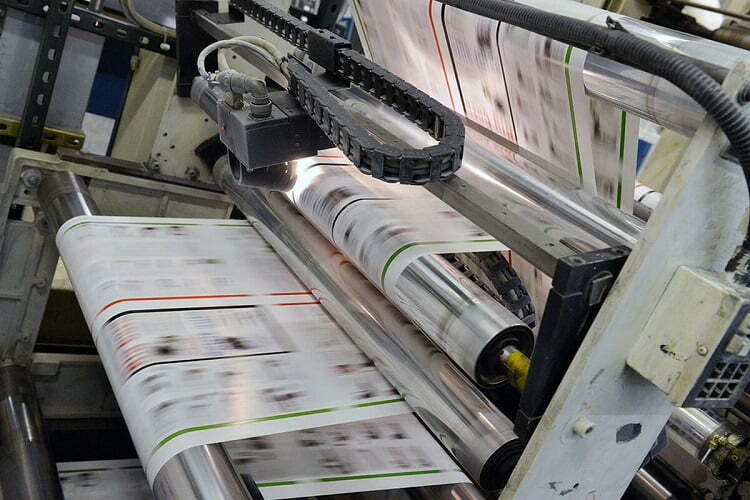 How the Printing Press Changed the World-For the Better!

Who Invented the Printing Press? Have you ever wondered why we have printers? Why we need printed books in today’s time and place? The truth is the idea of print is not something new.

Once upon a time, books were handwritten copies of information, reserved for only the rich and powerful because it was so coveted. As time progressed and we moved away from handwritten books, China used woodblock printing and Korean bookmakers used movable metal types.

The printing press was a dream realized for one man, many years ago. His goal was simple. He wanted to make it easier to print large quantities of books or papers, with ease. At that time, it was something that would change the world in many ways. That man was none other than Johannes Gutenberg.

What is the Printing Press?

Many say that Gutenberg’s printing press shaped the future. It worked with a screw-type wine press. When in use, it would squeeze or “press” down evenly on inked metal type. With this advancement at that time, it allowed books to be inexpensive and mass-produced.

These books could cover every imaginable idea, topic, and story ever told, which put the power of knowledge into anyone’s hand that wanted it. With this newfound expansion of knowledge that was available to any and all people, it transformed the world, dragging Europe out of the Dark Ages and into the Renaissance Era.

Gutenberg’s effort to speed up the printing process meant that he had to break down the “standard” wooden blocks that had been in use previously. He broke them up into individual components that included uppercase and lowercase letters, punctuation, and more. By separating them, he could cast them into movable blocks of metal letters. These metals included lead, antimony (a semi-metal), and tin. These were the same things that China was using. However, the screws in his press made it easier than ever to apply ink to paper.

The ink he used is thought to be oil-based so that it would stick well to the metal typeset and then transfer to paper or vellum without bleeding a lot.

Why Did Gutenberg Invent the Press?

Most of Gutenberg’s early life is a mystery, even down to the fact that no one knows his exact birthdate. However, most do agree that he was born between 1394-1404. The city of Mainz, where he was born, has declared his official birthday to be June 24, 1400. We do know that he was the youngest son of a patrician merchant, Friele Gensfleisch Zer Laden, and his second wife, Else Wyrich, a shopkeeper’s daughter. Gutenberg was born Johannes Gensfleisch zur Laden zum Gutenberg.

Gutenberg was a metal worker, or goldsmith, who also pursued other crafts and hobbies including gem cutting and teaching his skills to others. Today, we acknowledge that he was a German goldsmith, printer, inventor, and publisher.

It is believed that Gutenberg invented the printing press around the year 1436. One of his biggest achievements was that in 1455, he completed copies of a folio Bible, the Biblia Sacra. It had 42-lines on each page and sold for about 30-florins each. This amount was approximately 3-years wages for a clerk, but still much cheaper than other bibles that could take over a year to prepare.

It is said that it took Gutenberg about three years to print 200 copies of his Bible. Currently, there are approximately 48 copies of this Bible still viewable.

For all that we came to learn from Gutenberg, he died on February 3, 1468, penniless, blind, and with all his presses impounded by creditors.

The Inventor Of The World’s First Printing Press | Absolute History

How the Printing Press Changed the World

The obvious change was how quickly things could be spread from one area to another. However, Gutenberg did not live to see it. He was unable to sell his Bibles quickly because he lacked reach. He could only sell in his area of the world, and not everyone in his area could afford it.

By the 1490s, things had taken off and in Venice, a printed copy of works by Cicero was only a month’s salary for school teachers, proving that the printing press had found its niche. To spread and enable the sharing of knowledge to everyone.

This invention also made it possible for Martin Luther to become the first, “Best-Selling Author” with his “95 Theses”, which he nailed to a church door in Wittenberg on October 31, 1517. It was then printed in London approximately 17-days later.

Science also got a makeover with the printing press and played a part in the “Scientific Revolution”. It allowed scientists to share their discoveries with other scientists so that they could learn and expand upon what others had already learned.

Overall, it is estimated that within the first 50-years of Gutenberg starting the printing press, there were approximately 500,000 books in circulation thanks to an impressive 1,000 total presses spread across the continent. Newspapers were also gaining popularity because they could tell others what was going on in the world around themselves. By 1690, there was even a newspaper in the American colonies by Publick Occurrences. It was printed in Boston.

Today, we don’t think much about the printing press and how it shaped the world for us to live in today. We don’t consider what it would be like to live in a world where there were no books to read, Bibles to live by, and where educational materials are within everyone’s reach. Also, we never think to ask who invented the printing press, or anything else about it. We simply appreciate that it is there.

We owe our current knowledge to a simple man named Johannes Gutenberg. A man who simply wished to make prints easier. Think about him the next time you are engulfed in a printed story or news article. Let’s give him the respect that he deserves, nearly 600 years after his invention.